In centuries gone by, like across much of Europe, France had large areas that were covered with dense woods and forests.

Although France still has a great deal of forest (increasing each year, as agricultural land in inhospitable regions gets abandoned), there are also many areas that we now see as open farmland that were once forested.

About 500-700 years ago, the Lot-et-Garonne region of southern France was well covered in trees, including oak and mixed woodlands. So the first building material that came to mind when building somewhere to live was, naturally, wood.

For a short period of time towards the end of the ‘dark ages’ – perhaps lasting as little as 10 years – a new ‘architectural style’ came into being in the region. 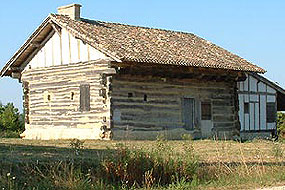 Called ‘maisons a empilage’ these houses were constructed quite simply by lying great beams of oak, one on top of the other, with ‘notches’ at the ends to hold them together (ie one side interlinked with the adjacent sides).

Simple houses, typically with two rooms separated by a colombage wall, one room was for the family and the other for storing the harvest.

It is hard to imagine the work involved in making roughly square beams out of tree trunks, but the houses have stood the test of time and there are still about 50 of them to be seen. Most are in the region between Villereal and Beaumont. Many are now in poor condition unfortunately, and there are various campaigns to ensure they remain and receive repairs when necessary.

If you are visiting, the tourist information at the towns mentioned above will be able to provide you with details of how to find the maisons a empilage and of which are best placed for viewing by the public (head to Saint Sabine, a small village between Villereal and Beaumont, and follow the signs for one of the best maintained examples).