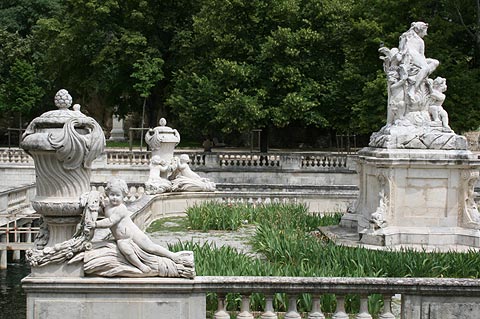 I recently had the opportunity to explore the Camargue region of south-western Provence and two important towns that fall just outside its eastern boundary – Nimes and Arles.

If you look up these two towns in your guidebook you wil be struck by the similarities. Both are broadly the same size, both have attractive old centres, and – most curiously – each contains a Roman amphitheatre and other roman ruins. I say ‘curiously’ because there are very few amphitheatres still standing so it seems remarkable that two of the best should be in such close proximity.

Well, despite the impression you might get from the guides, the two towns are very different in character – and both are unmissable if you are exploring this part of France.

Arles, for me, was the most immediately impressive. Many of the houses in the streets of the town have that faded-beauty that we look for in Provencal towns, and you can imagine Van Gogh ambling around the town painting the cafes that must have looked much as they do today.

You might be a bit disappointed to find that the town has no Van Gogh museum, and rightly so since he spent the most productive years of his life here.

In an effort to make amends there are other sights such as the Espace Van Gogh (a courtyard built and decorated to recreate a Van Gogh scene), a museum full of paintings by leading artists which pay homage to van Gogh, and a sprinkling of cafes that try to recreate the era. But you’re right – there still isn’t a Van Gogh Museum, and there should be!!

But disappointment over, you will love walking through the streets of Arles and discovering the small cafe lined squares that give the town its character. 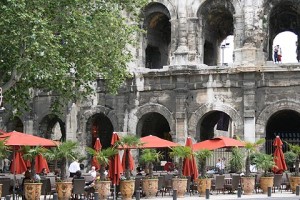 Nimes, on the other hand, seemd to me a more lively city. The buildings are less ‘typical Provence’ – rather more modern (19th century) and more luxurious than those in Arles. Different, but neither style is better than the other. There are more shops scattered through the town, which was probably why it seemed livelier.

Although less immediately impressive, Nimes rapidly grew on me and I was reluctant to leave when my visit was over.

I got the impression that Arles focussed more on tourism while Nimes would continue about its business regardless of whether tourists turn up or not. Just my impression though.

Each town has also let the side down slightly with one of their gardens – the cloister gardens at Arles and the ‘large open area which should be a garden’ in front of Diana’s temple in Nimes both need attention. The large garden with children’s area at Arles and the garden up the hill behind the temple of Diane at Nimes each go some way to make amends!

But in conclusion I can only repeat, both are very attractive lively towns, with their own characteristics, their own impressive historical monuments, and you should visit both as soon as possible – I will be returning soon!