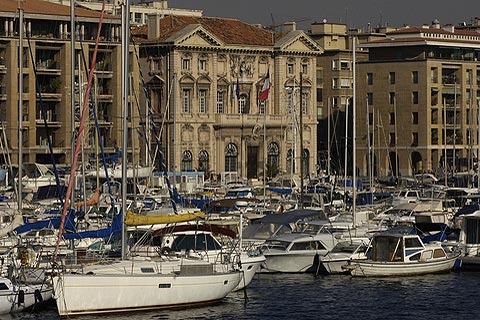 Marseille is a city with an ancient seafaring vocation, so an essential route to see the attractions of Marseille should depart from the ‘old port’ of the city. Built in an area protected by the hills of Saint Lorent, Moulins and Carmes and two fortress (Saint Jean and Saint Nicolas) it is also a characterful place with its wharves dating back to the seventeenth century, and the sight of colourful fishing boats at anchor, the fish market and a great number of bistros.

Nearby you can visit the Musée des Docks, which contains examples of goods dating back to the first century B.C. and the Musée du Vieux Marseille, where you see a model which reproduces the city as it was in Roman times. Also dedicated to local history isÂ ‘Musée d’Histoire de Marseille‘, which also contains the remains of an old boat (3rd century BC) discovered in the Old Port area. 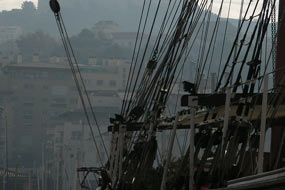 Also interesting for visitors to Marseille is the old ‘Panier district, with the ‘Maison diamante’ and the ‘Vielle Charité’ (XVII-XVIII century) – an architectural work by Pierre Puget and today the home to several museums (including the ‘Museum of African Arts‘ and ‘Mediterranean archaeology’), among which stands out the Marseille Mediterranean Archaeology Museum with its Etruscan, Roman and Egyptian artefacts (statues, votive offerings, texts on papyrus).

Also of unquestionable value is the Musée des Beaux Arts in the Palais de Longchamp, very rich in the work of artists of many different nations, including paintings by Corot (‘View from the shore’), Courbet (‘The Deer’) , Tiepolo (‘Christ and the adulterous woman’), Perugino (‘The family of the Virgin’), Guercino (‘The departure of Cato from Utica’), and Rubens ( the ‘Wild-Boar Hunt’).

Entirely dedicated to the painting of the twentieth century is the Cantini Museum, with work by Picasso (the ‘Head of a smiling woman’), Signac (‘The entrance of the port of Marseilles’), and then Ernst, Matisse and others.

For contemporary art in Marseille visit the the Musée d’Art Contemporain. Opened in 1994, it presents the most diverse trends, with work by Raymond Hains, Cesar, Orozco and Tinguely.

To the north of the river in the Old Port stands the 19th century Cathedral of the Major, built on the the site of the ancient cathedral, which was itself said to have been built where once stood the Temple of Diana, the goddess to whom the Phoceans colonistsÂ were particularly devoted. The church was built around the eleventh century, with a plan typical of the first basilica in paleo-Christian churches, in Romanesque style. By decree of Louis Napoleon (1808-1873) in 1852, they established that the church would be rebuilt at great expense, and the new Marseille cathedral has a Byzantine style, with front stripes and green marble stone from Cassis.

Moving south you can admire the ancient and huge 15th century arsenals, which once housed crews but also acted as a prison. They were largely demolished in the mid eighteenth century. Here we find also the Church of Saint Victor, altered over the centuries although dating originally to the eleventh century, with three aisles and vaults: it has an imposing structure, notable for the presence of two fortified towers and a structure similar to that of a castle. The interior has antique and valuable paintings, such as The Virgin by Michel Serre (1658-1733). Also interesting are the underground crypts (13th century), rich in precious artifacts including sculptures and sarcophagi.

Another building of considerable value is the Notre Dame de la Garde (19th century), built in Romanesque style with Byzantine influences: in ancient times the site was an observation post on which a chapel stood, and above which the figure of the Virgin is silhouetted against the sky.

There is more to absorb than just the key ‘Marseille attractions’ during your visit: to enjoy the atmosphere take a stroll along the most famous route through the city, the Canebiere (XVII century) – so called because it was here that industries and the merchants of hemp were based . The Canebiere is an elegant street, with very beautiful buildings. It was once more lively, but today is home to numerous shops, and is very popular with visitors.

Attractions and places to visit near Marseille 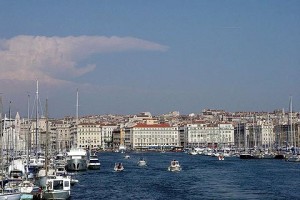 The region around Marseille offers a great deal of attractions to lovers of the natural environment. There are the magnificent Calanques along the coast to the east of the city which extend for tens of kilometers to Cassis, forming a rugged Mediterranean coastline. Visit also the beautiful islands of Frioul, with the Chateau d’If, made famous by the novel The Count of Monte Cristo by A. Dumas.

There are many other very beautiful places and small villages where, after exploring, you can taste the authentic dishes of Marseille such as the famous bouillabaisse (fish soup), and other local dishes such as the tapenade, accompanying it with the Cotes de Provence wine (white and pink) that is produced in the Marseille region.