I'm not always a big enthusiast for the beaches of Languedoc-Roussillon. Most of the Languedoc resorts arose in the 1960s and 1970s when the mosquitoes were cleared away from the region to make way for tourists under the so-called "Mission Racine". A fair number of them are dated, crowded, have too much building and development and little of historical interest.

The beaches are often long and sandy and very windswept and lacking for shade. 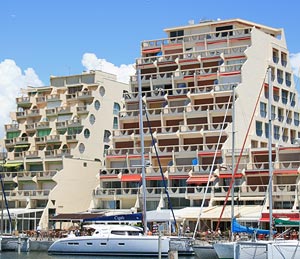 So my expectations when I visited La Grande-Motte were, to say the least, not high. But this is a resort with a difference.

Found at the eastern end of the Languedoc coast (shortly before it transforms into Provence), La Grande-Motte was designed by an architect called Jean Balladur who based his designs on early Colombian pyramids. Whatever the inspiration, the buildings are starkly 1970's in appearance but in a stylish and interesting way, if you are discouraged by the words "1970's architecture'!

The harbour is attractive, and of course there is a beach, but I spent the duration of my visit admiring the colours and shapes of the apartment blocks – which is a very unusual way to pass the time in a Mediterranean beach resort!

Various buildings have used different shapes, designs, patterns and colours to add to the , errr, excitement? A few sculptures along the seafront date from the sam epoch.

The town behind the resort was also clean and well planted with lots of trees, which is all I ask of a seaside resort.

Anyway, if groovy 1970′s architecture is your thing and you plan to visit the Languedoc coast, I think you could do a lot worse than stay at La Grande-Motte. My only regret? I had already booked a hotel somewhere else a few kilometres away and couldn't spend the evening exploring the town and taking more photos.