We've looked before at some of the bastide towns (medieval 'new towns') in the north of the Lot-et-Garonne department of southern France. This time we head to the south of the same department, and across the border into the Tarn et Garonne department.

The "Pays Agenais" as it is known is the region around the town of Agen and features numerous villages and small towns, many of them bastide towns, of historical interest.

The central open squares are intact, often with arcaded buildings around the edges that provided shelter to market traders 500 years ago. 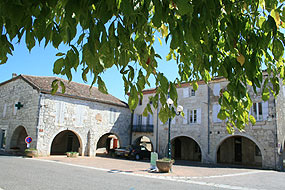 Sometimes the original medieval market halls are also found in the center of the square. One such example is at Laroque Timbaut, unusually having stone columns instead of the more common wooden structure. (The market hall at nearby Bourg de Visa is altogether more modern, with an ornate structure in wrought iron replacing the more traditional market hall).

If you are able to spend a couple of days in this peaceful rural environment you will also discover small ancient churches, and lots of half-timbered building dating from the 15th-17th centuries.

Some suggested places to include on your itinerary are: 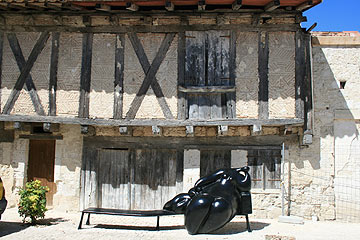 1) Walk in the footsteps of Charlemagne's army at Laroque-Timbaut – the army was suffering from an ilness in the troops, but the water from a stream in the valley proved to be an effective cure!

2) Beauville, site of an important castle in the 13th century and home to local barons until the 16th century

3) Brassac, to see the castle which partly dates from the 12th century and was heavily fortified in the following centuries

Other possibilities are Puymirol, Montjoi, Bourg de Visa and several others.

Note that although each of these villages has its own particular charm, they are all small and have limited facilities and don';t really take long to explore. Nonetheless, the "pays Agenais" is well worth exploring as part of a gentle relaxing break in this unspoiled part of France.