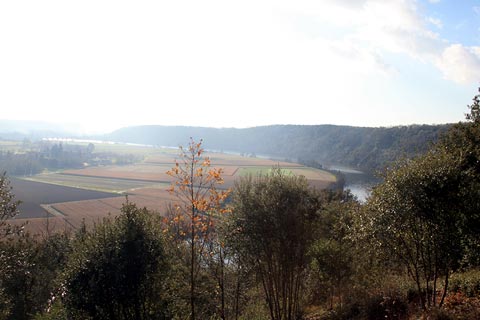 The Dordogne region is well known for its scenery, its castles and its beautiful medieval villages, and rightly so.

There are many places where you are close to the Dordogne river, and plenty of opportunities to canoe along with the flow, passed villages and castles. There are also a couple of places where you can admire the view from high above the river.

One such place is Tremolat – the Cingle de Tremolat is a large curve in the river where the river follows a giant meander, with the two sides of the loop almost close enough to join up.

You can’t see from this picture (which shows perhaps one third of the scene) because it can only show one part of the loop, but from a vantage point high above the river you can see the entire circle formed by the river. 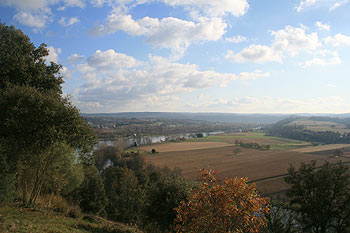 The view from here, at the top of the Cingle de Tremolat, is one of the finest and most far-reaching in the Dordogne, and should be high on your list if you are visiting the region. Autumn is perhaps the most impressive because of the tree colours, whereas the river can be a bit brown in spring following heavy rain.

But one thing is sure – whenever you visit, Tremolat never fails to disappoint!

The small village of Tremolat itself also deserves a visit , especially for its 12th century fortified church.