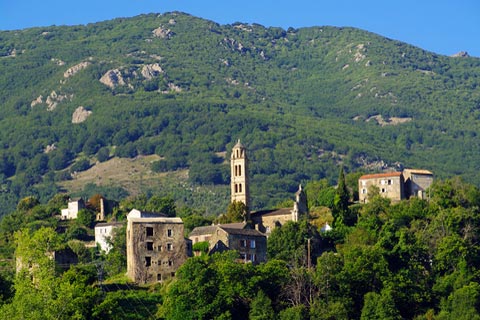 Heading south to the French island of Corsica, you reach a popular destination that has many busy resorts, towns and scenic highlights, with many renowned beaches and harbours filled with expensive yachts.

Less known on the ‘Isle of Beauty’ is the east coast, and less visited again are the remote villages that can be found in the forested slopes in northern Corsica to the east of the high mountains. 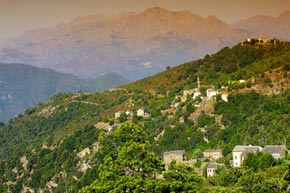 The region here is called Castagniccia, and is a chance to see and appreciate Corsica as it was hundreds of years ago, with small villages and hamlets joined by narrow roads and footpaths across the hillside passing through the chestnut trees that have long been an important source of income for the region.

Castagniccia is best explored by following the roads that pass through some of these villages. Many are small, with little more than a cluster of ancient houses standing a round a small church, but most share the common attributes of having a great deal of charm, and being in stunning locations – both of which amply repay the extra effort to reach the region.

There is little to betray the fact that the region was once the most important and populated in Corsica, or to hint at the revolutionary fervour that led local resident Pasquale Pauli to become leader of the struggle against the occupying Genoese forces in the 18th century. Now it is a quiet destination, with little of the bustle that is found in much of Corsica during the summer.