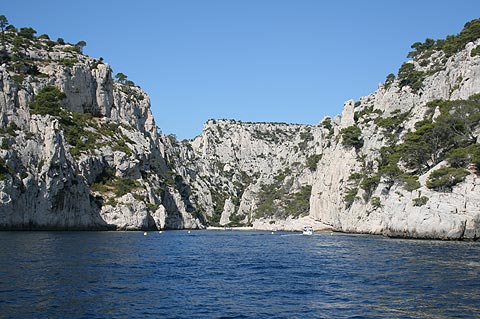 On my travels last year I took a rare break from rushing around visiting and photographing places to chill-out on a two hour boat ride. Although I still called it work when I was telling Mrs B what I’d been up to.

Setting off along the coast from Cassis towards Marseille, the trip was to pass by several of the so called Calanques of Marseille.

These stunning rock formations are dramatic white limestone cliffs that plunge hundreds of feet into the turquoise sea below, with inlets (calanques) leading to tiny beaches. (You can see more pictures at the bottom of this Marseille Calanques page). They are an unmissable highlight of a visit to this region and a pleasant trip from Avignon if you want to avoid staying in Marseille itself.

Anyway the boat trip is a dim and distant happy memory – but the reason I mention it now is because the region has recently become the first National Park to be created in France in the last 30 years – the Calanques National Park.

Only the 8th National Park to be designated in France this is a great achievement, especially given the very close proximity of the urban centre of Marseille. The park also includes some islands off the coast, and runs along the coast and into Marseille itself (the part that is already developed will have less strict regulations than the undeveloped parts).

Covering some 15,000 acres (6500 hectares) of land the National Park was implemented from 2011, and coincidentally just two years later Marseille itself was the European city of culture in 2013.

Congratulations to both of them – exciting times all around for this part of southern France!